Have you ever wanted a fireplace hanging from your ceiling? We have a wide selection of floating bioethanol fireplaces. Our ceiling mounted bio ethanol fires do not need a chimney or vent. This makes them very easy to install as they are simply mounted directly into the ceiling with a bracket.

The bioethanol hanging fireplace is a beautiful and stylish addition to any home while providing warmth and cosiness to any environment.

If you have any questions related to the installation of the pendent bioethanol fireplace or the fireplace itself, please do not hesitate to contact us.

You can also go check out our wall mounted fireplaces here. 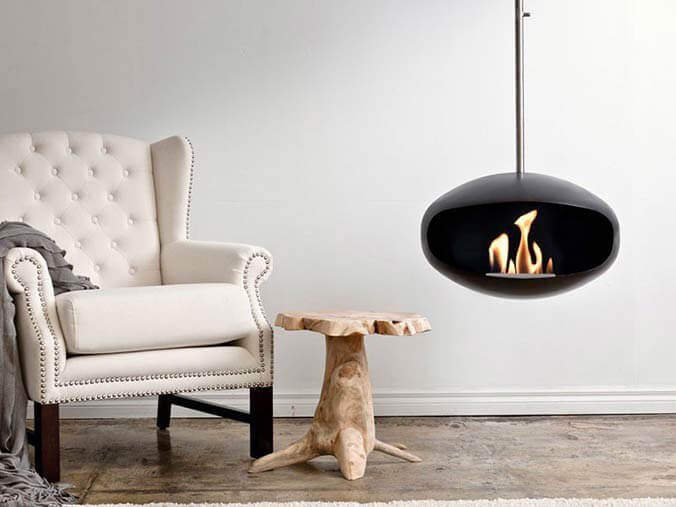 Cocoon Aeris in mat black with a black ceiling rod The installation of a bioethanol hanging fireplace is relatively easy, however, we recommend that a minimum of two persons participate in installing the biofire. Our bio pendant fireplace often consists of two parts: The piping and the biofireplace itself. The easiest way to install your suspended bioethanol fireplace is to assemble these two parts first. That furthermore provides you with a better idea of the size and therefore how and where the bioethanol fire should be placed within the room.

How is the Selection of Colours?

Regardless of the category – freestanding, ceiling mounted or built in – the black coloured fireplace is always the most polular type of bioethanol fireplaces. We simply love the black colour and we must also confess that it fits perfect with the orange flame. Orange and black provide a fantastic engagement – even on our own logo – simply amazing!

Little by little the white colour becomes more and more sought but it often has its limitations when it comes to fireplaces. The engagement between the orange colour from the flame and the white frame makes no difficulties at all. However, truth is that the hot flame might cause stains on the delicate white colour. That is why discolarations might appear if a white fireplace gets too close to the flame.

Even though the flame is incredibly unique and good looking the best colours are definetely the black, the steel and the dark-looking types. Steel is also often used in fireplaces like that. They can appear in both brushed steel, stainless steel or polished steel. They are not nearly as delicate as e.g. the white shade. The price can vary depending on the type of steel. For instance the Aries model in polished steel and this steel shade is way more expensive than the standard types of models. This price reflects the extra processing which appears in the manufacturing phase. The manufacturers are not 100 percent closed on their selection of fireplaces so have no worries and contact us if you have a certain colour in mind.

Are you still in doubt how to get hold of your perfect fireplace and do you have any questions? Contact us! Get ahold of us and let us help you on our way. Like that it is easiest to reach our goals so you become satisfied with your purchase. Through the whole process we are standing by on phone, e-mail, Facebook, live chat and in the store. If you hit a point outside our opening hours you might want to check the guide section on our website where you will find a lot of guidance about excactly these kind of fireplaces.

Who are the Manufacturers Behind?

The bioethanol fireplaces provide a fantastic effect which is might caused by the fact that it is quite rare to experience fireplaces that are ceiling mounted due to the complicated construction.

Even though also a ceiling mounted woodburning stove and gas fireplace exist who float below the ceiling. However, the most critically acclaimed ceiling mounted fireplace is manufactured by Cocoon Fires which is based in Spain and owned by Australian company Anthony.

They have spent several hours on a producer and the impact has made its mark. Federico Atero has brought the Cocoon Aeris fireplace into our burning hearts and even the architects are impressed.

Another manufacturer of ceiling mounted fireplaces is Hein and Haugaard who produces the goods in the northern Danish area. The two bioethanol fireplace alternatives differ quite a bit from each other design-wise.

The Hein and Haugaard fireplace is more of an industrial type and is available in four different colours and the lenght of the pole is adjustable by request. Both manufacturers also produce a freestanding version made for floors where Hein and Haugaard only make one on foot as Cocoon Fires do both a pedestal version and the tripod model Terra.

How Much does it Cost?

The price is often a cruzial parameter when it comes to buying and selling fireplaces. Therefore it is also an important issue to remember in the price section of these fireplaces. They differ relatively much price-wise.

We offer three levels of prices in this category. There is the standard, the UFO series and finally the stylish Aeris. The price often covers the materials and ressources that are spent in the manufacturing. Same goes for the mix in the assortment. The higher the price the higher the quality and you will get more specifications.